The dogs in the sun 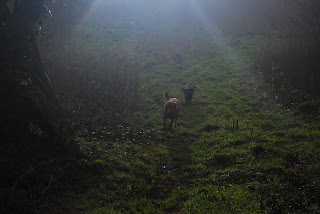 January 15, 2021
It feels weird to write about 2020 when in a sense it's still with us - a long, dark lockdown of the soul, stretching out into the indeterminate future. What a fucker of a year. The virus has impacted so many lives in so many ways it makes everything else seem trite by comparison. I type this sitting staring at the walls in locked down London as the trees in Devon slumber peacefully. Another growth ring for them. We got planning permission in the spring to build a cider shed at the orchard meaning I can move out of my in-laws barn which I was slowly colonising as I added more and more containers to the collection like a Speidel fanboy. This is probably not going to be a fast move (£££!) but it gives the long term plan a little more solidity and a path to the future. Speaking to pubs, even when they were open this year, tastes changed somewhat; the drinking crowd being younger as the oldies were more likely to play it safe and stay home, meaning a shift to sweeter cider or away from
Read more

December 23, 2013
Christmas is coming and we're off for a few days to celebrate. The cider that's been bubbling under the stairs for the last couple of months has slowed and the plops of bubbles rising are fewer and further between. Easing out the bungs releases a delicious apply smell. We've racked all the containers, indulging in the geekery of ph's and specific gravities as well as numerous and more qualitative taste testes which made the whole afternoon a slightly tipsy blur. The process also got a bit messier as the afternoon progressed. While all the equipment was carefully sterilised, my aim with the siphon tube became poorer as we progressed following numerous taste tests, leaving  slightly sloppy kitchen floor. And how did it taste? a little rough around the edges but pretty palatable. The demijohn's with blends worked better than the single variety versions but its all an experiment so we'll see how they evolve over time. Now we wait. Everything's sitting ther
Read more

July 10, 2016
I’ve been making cider for years but this is my second year of selling on to pubs. I live in London but source apples down in Devon, pressing and fermenting at my in-laws’ house just outside Newton Abbot. This year I doubled down on production. I fermented 450 litres of cider from apples donated by farmers who had no use for them, a paltry amount by commercial standards but a fair bit of hard graft for me.  Most of the trees I picked from were old, scattered around ancient fields.   None of the farmers really knew the types of trees they had so I collected by taste, looking for the mouth-puckering tannins and balancing with the sweeter varieties and some cookers from a friend’s garden (I’m no expert but learning!). A few days of picking was followed a couple of weeks later by three days of pressing in late October 2015, a really mild dry period. In the spring I racked off a few bottles and started stalking the streets. It’s hard to sell cider in London,
Read more