Showing posts from May, 2012
Show All

The benefit of waiting

May 27, 2012
I decanted half my first batch of cider just after Christmas. I put the other half into 3 Demijohns, I added sugar to two and put one somewhere warm and the other out in the cold. I put the remaining demijohn without sugar in the cold. I then left them for three and a half months. Beyond the sugar there was no appreciable difference between the demijohns but it tasted a lot better than the first batch. There were few bubbles sneaking through in the demijophns while it was sitting but nothing like the first fementation. However there was something happening as there was a fair build up of sediment and the Cider tasted a lot better, smoother and less rougher around the edges. I've now sulphated it and racked it off into a bag in a box. my wife is pregnant so its all the more for me. it really does pay to let it sit!
Post a Comment
Read more
May 26, 2012
It's been a while, the weather has made the thought of leaving home a fairly miserable prospect, let alone schlepping all the way down to Devon. However a couple of weeks ago we took a long weekend and the weather gods smiled. We went to stay with some friends who'd traded London for a cottage in Cornwall and with the sun shining it was a fantastic advert for moving to the country. On the way down we did a spot of cider tasting at Truro Farmer's market before a long walk on the coast path a a BBQ on the beach. We drove back to Devon on Monday and spent the day de-brambling the wood and then weeding around the apple tree's. All the new trees had survived planting and my enthusiastic pruning and were at different stages of growing leaves and coming into blossom. The Colloget Pippin's seem to be thriving the most (both the new one and the one I planted last winter) but it's early day's yet. The site used to be  largely covered with Nettles but a bit of Judici
Post a Comment
Read more

spring trying to get sprung 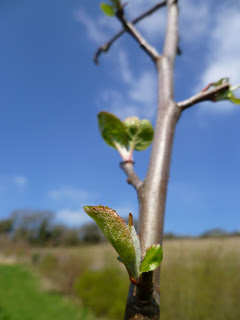